By analyzing the structural characteristics of large-scale die-casting molds, an optimization scheme for the mold insert structure, guide structure, shunt cone, melting cup, core-pulling cylinder and other structures is proposed. Practical verification shows that the optimization scheme not only improves the quality, maintainability and die-casting yield of the mold, but also reduces the processing difficulty of the mold and improves the production efficiency and mold life.

Due to the large size and complex structure of the mold, large die-casting molds have the following characteristics: (1) It is difficult to install and disassemble the dynamic and fixed mold cavity inserts, especially after use due to thermal expansion and damage to the parting surface during use, resulting in difficult disassembly; (2) The mold is bulky , the thermal expansion is large, and it is difficult to maintain stable mold accuracy during the production process; ③ the overall temperature of the mold is difficult to control; ④ the cooling time of the casting is long, especially the cooling time of the cake part is long, resulting in a long single-piece beat; ⑤ The core pulling stroke is large, and the hydraulic pumping The core time is long and the production efficiency is low.

2.1.1 The dynamic and fixed module adopts a mosaic structure

(1) According to the functional requirements, the reasonable use of die steel can reduce the cost of the die. As shown in Figure 1, module A is the part forming area, with complex shape and high surface quality, so imported high-quality hot work die steel (W350, DIEVAR, etc.) is used, and module B is in contact with the gating system, and ordinary die steel ( H13).

(2) According to the complexity and vulnerability of the cavity, splicing and splicing can improve the processing technology and facilitate replacement. At the same time, maintenance is convenient and fast, and it does not affect the overall performance of the mold.

(4) The use of mosaic structure for large-sized cavities can reduce the difficulty of processing and prevent defects such as cavity cracking and deformation.

In the continuous production process of the mold, the temperature of the cavity will be higher than the temperature of the sleeve, which will cause the expansion of the forming module to be greater than the expansion of the sleeve, and the H7/g6 matching gap between the sleeve and the cavity cannot resist the change of thermal expansion. thermal deformation will occur. The larger the cavity module size, the greater the deformation. In order to solve this problem, the shape of the cavity module adopts the structure of Figure 2. The two adjacent straight surfaces are used as positioning reference surfaces, and the other adjacent two surfaces are made into inclined surfaces. After the insert is heated and expanded, the horizontal expansion of the parting surface can be determined by the vertical direction. Release, can effectively solve the problem of template expansion and deformation, generally α is 6°. At the same time, when designing the shape of the forming module, the surrounding and bottom surfaces of the module adopt large rounded transitions to ensure that the strength of the sleeve is not damaged.

Figure 2 Assembly of inserts and sleeves

For large molds, due to the large center-to-center distance between the guide posts and guide sleeves arranged on the edge of the mold, under different heating conditions of the moving and static molds, the amount of expansion will be different. When the change is high, the guide post and guide sleeve will produce abnormal noise or even surface strain, which will affect the mold matching accuracy. Therefore, the large mold adopts the structure of the square guide post and guide sleeve, the sliding fit of H9/e8 is adopted in the direction of small thermal expansion, and the gap of 2 mm is adopted in the direction of large thermal expansion. Because the mold temperature field radiates radially from the cavity as the center, the square guide column guide sleeve is generally arranged at the four corners of the mold sleeve plate, and the direction and clearance value are determined as shown in Figure 3.

The diameter of the large mold material cylinder is large, and to ensure the effective transmission of the boost pressure, the material cake needs to have a sufficient thickness. Due to the mismatch between the large volume of the material cake and the cooling rate of the casting, the mold retention time is prolonged, the production cycle is prolonged, and the material cake often bursts when the mold is opened and the parts are taken out, so the cooling of the split cone and the melting cup must be increased. , in order to effectively shorten the cooling time of the cake and improve the production efficiency. Figure 4 shows the optimized split cone and cup structure.

Try to design a diverter cone in a large die-casting mold, which can reduce the length of the melt cup and the push-out stroke of the injection punch. The inside of the shunt cone is processed into a large cavity, the volume of the cooling water channel is increased, and the single-sided wall thickness is guaranteed to be >25 mm according to the strength calculation. The cooling water adopts a single-point independent nozzle water cooling method. The inner wall of the stainless steel water pipe enters the water and the outer wall returns water, and the diameter (cross-sectional area) of the inlet and outlet water pipes is increased to ensure sufficient cooling water flow to achieve rapid cooling. The cooling water return end is connected to the external flow valve of the mold. During the trial production, an infrared camera is used to monitor the mold temperature at the shunt cone, and the flow valve at the return end is adjusted according to the mold temperature, and finally the management value of the cooling water flow is locked. In mass production, the cooling stability of the split cone is ensured by monitoring the flow value of the cooling water. 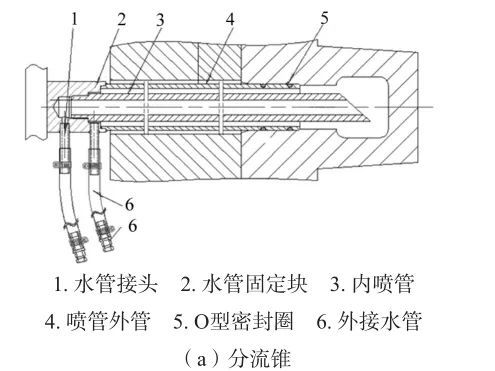 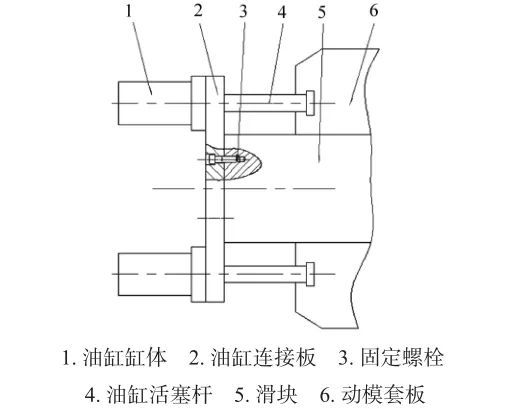 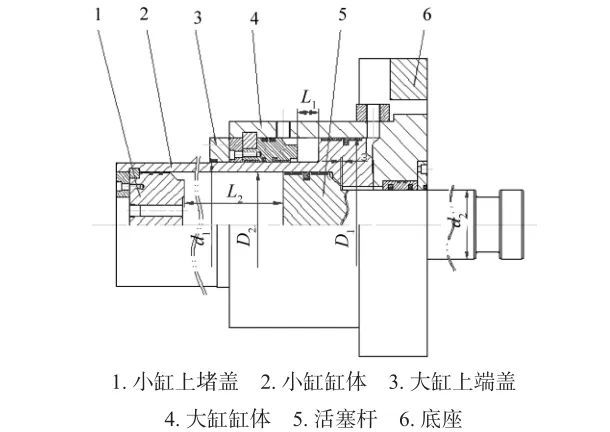 With the enlargement and integration of products, the structure and shape of die castings are becoming more and more complex, and thin-walled parts with uneven wall thickness are increasing. At the same time, higher requirements are placed on the quality of castings. Low cost is the development trend. On the other hand, thin-walled castings will have difficulty in feeding at the hot joints of local wall thickness, and are prone to casting defects such as shrinkage cavities, resulting in the reduction of casting strength and the risk of leakage. The local pressurization technology is to set a pressurized oil cylinder on the die-casting mold to perform secondary pressurization on the hot joint of local wall thickness, so as to obtain a casting with dense structure and eliminate the generation of local shrinkage. The local pressure boosting mechanism can be adjusted according to the location at the hot joint of the casting.

It can be set on the static and dynamic mold or the side-drawn slider (Figure 7). 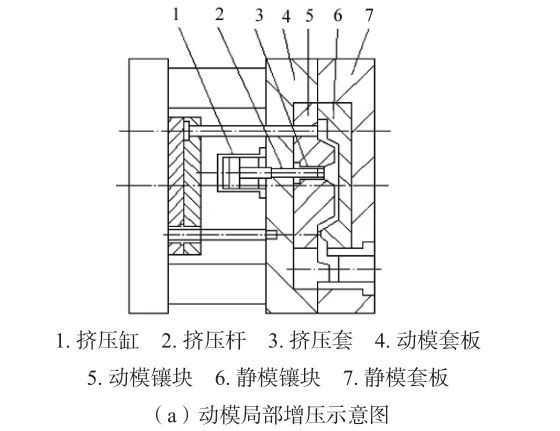 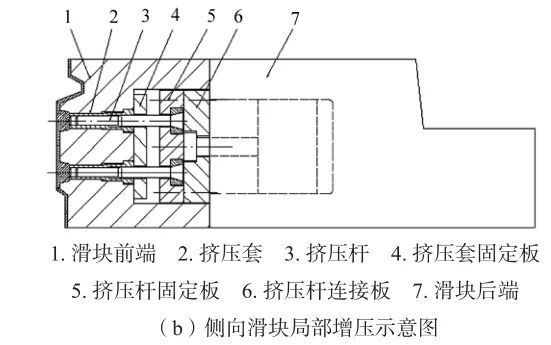 The above optimization measures for molds have been applied to molds for die-casting machines of more than 2 000 t, such as automobile engine cylinder blocks, oil pans and gearbox casings. The processing difficulty and mold cost are reduced, and the production efficiency and mold life are improved. An application example is shown in Figure 8. 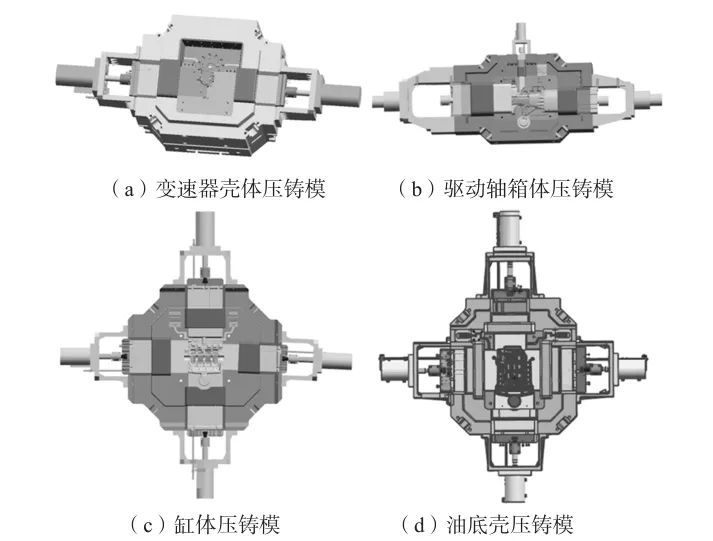 (1) Under the premise of ensuring strength and rigidity, the forming parts of large die-casting molds should be divided according to function or process as far as possible, and the inlaid structure should be adopted. The two sides of the outer edge of the insert are assembled with inclined surfaces, which can reduce the deformation caused by the thermal expansion of the mold.

(2) By optimizing the structure of the diverter cone and the melting cup, and increasing the cooling of the casting material cake, the production tact can be reduced and the efficiency can be improved.

(3) The large-scale die-casting mold adopts square guide column guide sleeve, which can ensure the guide accuracy of the mold under different heating conditions of the dynamic and static molds.

(4) The hydraulic core-pulling mechanism adopts double oil cylinders to ensure the smooth operation of the large-sized sliders, and the use of composite oil cylinders can improve the running speed of the sliders, thereby improving production efficiency.

(5) The local pressurization mechanism can effectively solve the shrinkage cavity at the hot joint of the casting, and can be set on the static and dynamic mold of the mold or the slider.