In the process of die-casting production, due to the high local temperature of the mold, sintered aluminum will appear in the local high-temperature hot joint of the mold, which not only affects the appearance of the casting, but also destroys the dense layer on the surface of the casting due to the sintered aluminum. Risk of leakage. During the filling process of die-casting, the die near the gate end is often swept away by the molten aluminum, and the die is often pulled, and in severe cases, cracking occurs; The appearance appears peeling and cannot meet customer needs. In view of the appearance problems of the above castings, the die-casting mold is partially covered. It has been verified that the appearance defects of the above castings can be solved, and the operation is simple.

As customers have higher and higher requirements for the quality of die castings, they not only have strict requirements on their mechanical properties and internal organization, but also put forward stricter requirements on appearance defects. For example, during the casting process of aluminum alloy die castings, After sintering and sticking to aluminum, straining and casting shot blasting, the phenomenon of peeling occurs, which can no longer meet the customer's requirements for the appearance quality of castings, which not only reduces the qualification rate of castings, restricts production efficiency, but also increases production costs.

1 Introduction to the coating process of die-casting molds

1.1 Microstructure of die-casting mold after coating 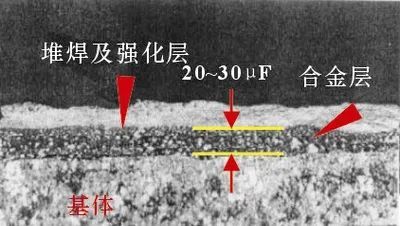 The coating material for the mold is WTC-90, which is a small amount of titanium added on the basis of WC, which can reduce its brittleness. In the process of mold coating, there is no need to heat the coated mold, and the coating at room temperature will not cause thermal deformation, and there is no stress concentration in the coating area, so it will not cause cracks in the coated part due to stress, and the tungsten carbide coating layer shows Out of its excellent ultra-high hardness, outstanding performance in anti-erosion.

The mold design is affected by the casting structure. In the actual production process, limited by the design of the gating system, the process window is relatively narrow, and casting defects exist concurrently. In principle, the internal quality of the casting must be ensured first, but the appearance of the casting often does not meet the customer's requirements. For example, the gate of the casting is pulled and cracked due to the gate erosion; the cooling water cannot be set at the sharp corner of the mold, resulting in temperature If it is too high, it will burn and stick to aluminum; there are many grooves in the mold, and the resistance during the filling process of the molten aluminum is relatively large, and flow marks are formed on the surface of the casting. In view of these problems, the introduction of the coating process in the early design of the mold and the later production can effectively solve the above defects.

2.1 Improvement of casting strain and cracking by die coating process

Figure 2 shows the design of the oil cooler cover gating system and the location of the drawing die. 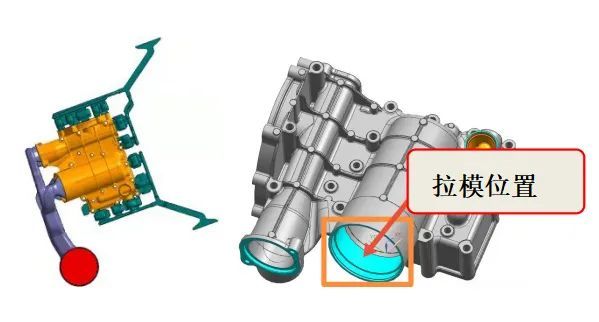 The mold is covered with 2 layers of coating, and the thickness of the coating layer is 0.05 mm. After verification, the defects of the die-drawing part have been solved, and the adjustment of the die-casting process, especially the speed requirements, have been relaxed. Figure 4 shows the comparison before and after shot blasting of the casting after the casting is covered, which fully meets the customer's requirements.

Fig. 4 Comparison before and after shot blasting of castings after coating

When the molten aluminum impacts the cavity or core at a high speed, the temperature of the impacted mold part rises, so that the chilled layer cannot be formed, and the phenomenon (sintering) that the molten aluminum corrodes (erodes) the mold occurs. On the blank is a coarse-grained layer (see Figure 5). 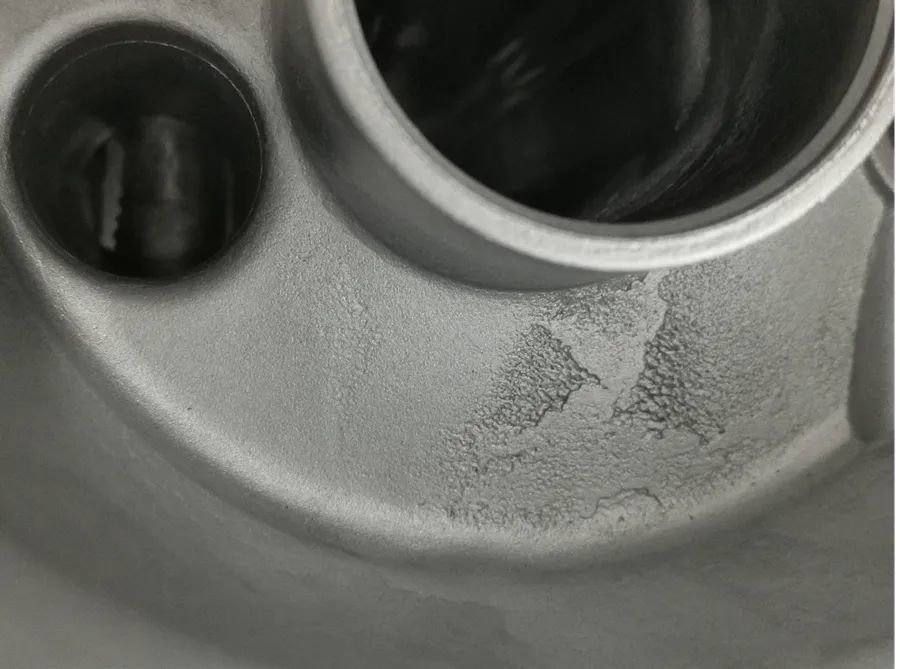 Generally, in the process of die casting production, cooling water can be set for the sintered part to reduce the local mold temperature, which can reduce sintering. However, due to the influence of mold structure and product structure, cooling water cannot be set in some positions; if the spraying amount of mold release agent is increased, it will affect the production takt. It has been verified that the local sintering can be effectively solved by coating the local sintered parts (see Figure 6).

Figure 6 Comparison before and after mold coating

After shot peening, a thin layer of skin will appear on the surface of the casting, or even fall off. It can be easily removed by hand, and its size, area and position are not fixed. This phenomenon is called peeling after shot blasting (see Figure 7)

The main reason for the peeling of castings is that some castings are specially designed, there are many grooves, and the molten aluminum fluctuates greatly during the filling process. The temperature drops relatively fast, and it solidifies before the mainstream reaches and the pressurization starts. Therefore, cold scar flow marks or pockmarks are formed on the surface of the casting, and the cold scar flow marks and pockmarks are the main reasons for the peeling of shot blasting (see Figure 8).