Several application examples of typical squeeze castings in automobile manufacturing are given. Through the study of typical parts, it is proved that squeeze casting is the most effective process method to improve the performance of castings. It can replace part of forging to produce parts with high performance requirements that cannot be achieved by other casting methods. Aluminum alloys are used in the automobile manufacturing industry. It is feasible to replace part of cast iron and cast steel to produce high-quality castings.

Several application examples of typical squeeze castings in automobile manufacturing are given. Through the study of typical parts, it is proved that squeeze casting is the most effective process method to improve the performance of castings. It can replace part of forging to produce parts with high performance requirements that cannot be achieved by other casting methods. Aluminum alloys are used in the automobile manufacturing industry. It is feasible to replace part of cast iron and cast steel to produce high-quality castings.

The squeeze casting process causes the liquid metal to be formed, solidified or accompanied by a small amount of plastic deformation under high pressure, which can eliminate defects such as shrinkage and looseness in the casting, and make the casting structure fine. The mechanical properties of the casting can be greatly improved by heat treatment, which is close to or equivalent to the mold. The level of forgings has good application prospects.

With the development of new energy vehicles and the need for lightweight vehicles, squeeze casting technology has become more and more widely used in automotive structural parts, such as control arms, connecting rods, engine brackets, wheel brackets and other chassis parts. The use of aluminum alloy materials to replace some forging to produce high-performance complex structural parts, to replace low-pressure and differential pressure casting, and metal-type gravity casting to produce structural parts with high reliability requirements has become the preferred future trend of automobiles.

The Ube HVSC-800PL horizontal squeeze casting machine is used for trial production, and the indirect extrusion process is adopted in the mold design. The squeeze casting process for steering knuckles was analyzed in the early stage of mold flow simulation. The results showed that the final liquid phase during the solidification process was lower in the center of the front wheel center of the part, as shown in Figure 1b. Risk of holes or shrinkage. In order to ensure stable filling and solidification, the round hole connected to the hub is improved by combining water cooling and local extrusion. Due to the detailed design analysis in the early stage, in the later mold trial process, except for the addition of venting grooves on the mold and modification of the extrusion pin gap, there were basically no major problems in the entire trial production process.

The squeeze cast steering knuckle was heat treated with T6, the solution temperature was 530 ℃, the heat preservation was 480 min, the water cooling was 40 ℃, the aging temperature was 180 ℃, the heat preservation 360 min, the mechanical properties were sampled from the casting body, the sampling location is shown in Figure 1c, the material is drawn The tensile performance test results are shown in Table 2, which meets the design requirements.

The squeeze cast aluminum alloy steering knuckle sample was processed and assembled with the counterpart for bench test. The test instrument was 160 KN/100mm hydraulic servo test equipment produced by SCHENK. The test parameters such as the magnitude, direction, and frequency of the loading force were tested. All are the same as the original cast iron knuckle. The steering knuckle was subjected to static strength and fatigue endurance tests under typical working conditions, and none of the samples showed any nonconformities such as cracks, deformation, etc., and passed the bench test. 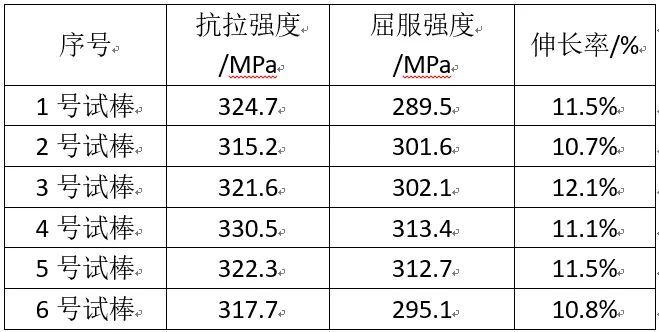 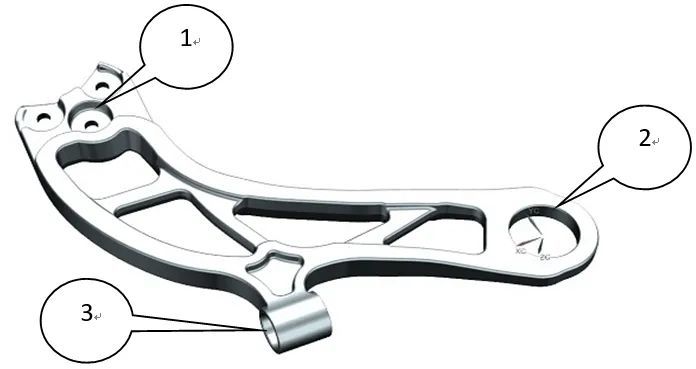 Figure 5 shows the aluminum alloy control arm parts. The maximum external size is 320 mm×154 mm, and the average wall thickness is 12 mm. The structure is optimized according to the topology, the skeleton is extracted, and the assembly requirements are finally designed into a rod system with a curved shape. . There is an assembly force relationship at three positions. The optimized structure is analyzed for force. See Table 4. The stress and deformation meet the design requirements. The overall weight of the aluminum alloy casting is 2.5 kg. From the structural characteristics of the casting, the casting has a simple structure and moderate wall thickness, which is suitable for squeeze casting. Figure 6 is a schematic diagram of the squeeze casting casting tree, Figure 7 is a partial extrusion structure diagram, Figure 8 is a movable mold water circuit structure, and Figure 9 is an X-ray inspection diagram of the squeeze casting control arm. It can be seen from the X-ray photo: Extrusion The casting control arm has local microscopic shrinkage porosity at the large hole, and no shrinkage hole or shrinkage porosity is found in other parts. 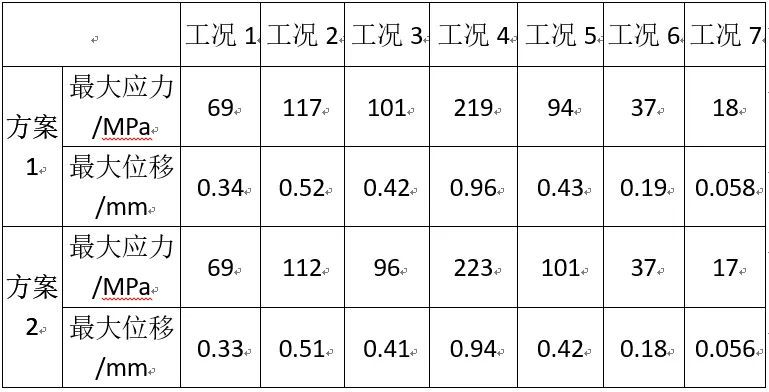 Figure 10 is the microstructure of the control arm casting under the condition of squeeze casting pressure of 100 MPa. It can be seen that the metallographic structure of the control arm of squeeze casting is: α+ eutectic. The existence of force increases the solidification rate of the casting, and makes the grains of the primary α phase have a certain degree of refinement. A sample was taken from the control arm casting body for mechanical performance testing. The mechanical properties of the castings were equivalent in all positions, with tensile strength greater than 300 MPa, yield strength greater than 230 MPa, and elongation greater than 8%. Meet the design requirements. After 1 million bench tests, the performance indicators of the product fully meet the technical requirements, and the stiffness indicators are higher than the original steel castings. 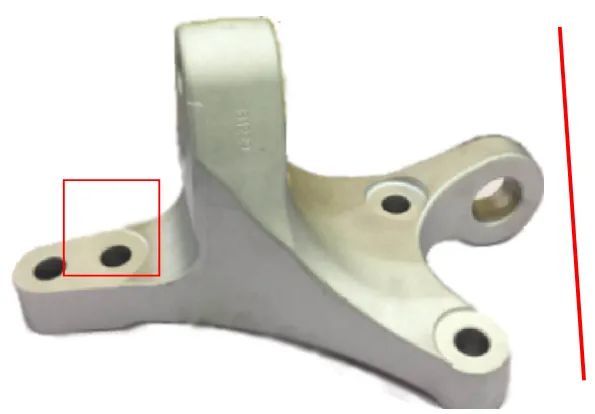 A 110-type engine support for a commercial vehicle is shown in Figure 11. It has a long life cycle and high performance requirements. The experimental parts of the bench must be able to withstand 250 kN without damage. The average wall thickness of the parts is 25 mm, and the maximum wall thickness is 55 mm. They are produced with UBE HVSC 8000kN indirect squeeze casting machine. The bracket material is made of A356.2 aluminum alloy. The mechanical properties measured by sampling from the thickest part of the product according to the design requirements are shown in Table 5 and Figure 12. Polishing the corrosion map shows that the castings do not have any casting defects such as shrinkage pinholes and slag inclusions. Figure 16 is a comparison diagram of the fracture of the modified product squeeze casting and the metal gravity casting. The fracture (a) grain of the squeeze casting is smaller than that of the metal gravity casting (b).

Table 5: Mechanical properties of the left bracket of the rear suspension of the squeeze casting engine 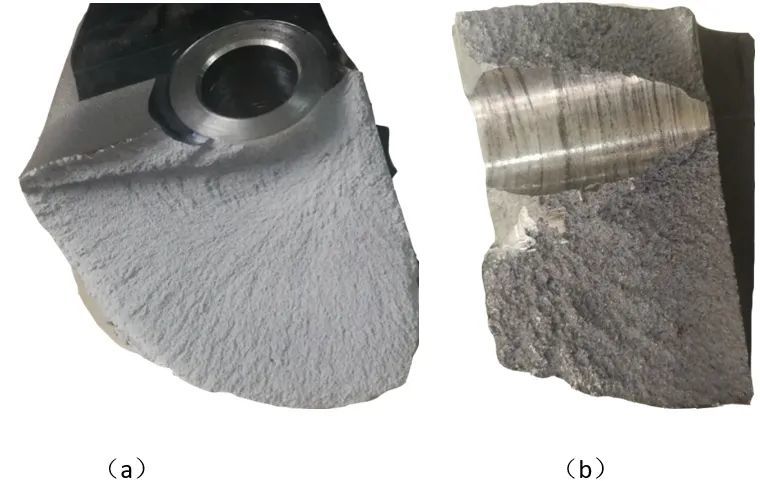 No permanent deformation and cracks were found in the product after 1 million fatigue bench tests. In the destructive test, the product broke and failed under the action of 365.7KN. The index was greater than the specified value of 250KN, which was close to 1.5 times. .

The application examples of several typical squeeze castings in the automobile manufacturing industry are given, which can replace part of forging to produce those parts with high performance requirements that cannot be achieved by other casting methods. It has become the consensus of the industry to replace some cast iron and cast steel with aluminum alloy in the automobile manufacturing industry. With the development of new energy vehicles and the need for lightweight vehicles, the application of advanced squeeze casting technology in automotive structural parts will become more and more extensive, and the application market for squeeze casting will be broader