Summary ZL101 aluminum alloy semi-solid billet with 3% SiCp (um grade) mass fraction was prepared by semi-solid mechanical stirring method and near liquidus method. The billet was heated for the second time and extruded to obtain SiCp/ZL101 aluminum composite material. The effect of solid solution and aging treatment on the microstructure and properties of composite materials was studied. The results show that the microstructure of the SiCp/ZL101 composite prepared by extrusion is nearly spherical α-Al, elongated eutectic Si structure, and polygonal SiC particles. After solution treatment, the eutectic Si transforms into a nearly spherical shape; after aging treatment, the number of precipitated phases at the interface between the matrix and the second phase increases, and the tensile strength, yield strength and elongation of the composite material reach 320MPa, 244MPa and 6.91%, respectively. , The microhardness (HV) is 114; the fracture of the composite material changes from the microporous aggregation type fracture to the quasi-cleavage fracture.

ZL101 aluminum alloy semi-solid billet with 3% SiCp (um grade) mass fraction was prepared by semi-solid mechanical stirring method and near liquidus method. The billet was heated for the second time and extruded to obtain SiCp/ZL101 aluminum composite material. The effect of solid solution and aging treatment on the microstructure and properties of composite materials was studied. The results show that the microstructure of the SiCp/ZL101 composite prepared by extrusion is nearly spherical α-Al, elongated eutectic Si structure, and polygonal SiC particles. After solution treatment, the eutectic Si transforms into a nearly spherical shape; after aging treatment, the number of precipitated phases at the interface between the matrix and the second phase increases, and the tensile strength, yield strength and elongation of the composite material reach 320MPa, 244MPa and 6.91%, respectively. , The microhardness (HV) is 114; the fracture of the composite material changes from the microporous aggregation type fracture to the quasi-cleavage fracture.

Semi-solid technology has the advantages of short process flow, low energy consumption, and one-time near-net forming. It is very suitable for producing casting alloys with a wide range of liquid-solid phase lines and good fluidity. Among the cast aluminum alloys, the most commonly used Al-Si alloy has better comprehensive properties, good fluidity, smaller shrinkage, hot cracking and cold cracking tendency, smaller segregation and gas gettering, and lower Cost, so it is widely used in aerospace, electronics, automotive and other industries. However, Al-Si alloys have low strength and are generally used to make parts with complex shapes but low performance requirements. The near liquidus method is convenient to operate and save energy. However, due to the lower casting temperature, the material performance is inevitably worse than traditional casting. Therefore, it is generally used after squeeze casting. Studies have shown that the semi-solid AlSi7Mg prepared by the near liquidus casting method and the thixotropic die forging technology has a tensile strength of only 216MPa after T6 treatment. Therefore, the application range of aluminum alloy materials is limited. It is a common practice to increase the strength of cast aluminum alloys by adding reinforcing phases. Xiao Pan et al. [4] prepared nano-SiC/AlSi7Mg composites by high-energy ball milling and stirring casting methods, and the tensile properties of the composites after forming under a pressure of 100MPa reached Hu Kun prepared nano-SiCp-reinforced AlSi7Mg composites by mechanical stirring and ultrasonic treatment. After T6 heat treatment, the tensile strength and elongation reached 335MPa and 5.6%, and good performance was obtained. However, there are few studies on semi-solid thixotropic SiCp reinforced aluminum matrix composites.

Use Al-12Si aluminum alloy, micron SiCp (10μm), pure magnesium (99.9% purity), pure aluminum (99.9% purity) to prepare SiCp/ZL101 aluminum composite material. First, the SiCp is placed in a resistance furnace for 1000 oC×2 h pre-oxidation treatment, mixed with aluminum powder, placed in a ball mill for pre-dispersion, and then cold pressed into a block; then the preparation process is to put the Al-12Si alloy and pure aluminum in proportion Put it into the graphite crucible and heat it to 680 ℃ in a well-type resistance furnace under the protection of CO2+SF6 atmosphere. After the slag is completely melted, add magnesium lumps and stir evenly, then heat up to 740 ℃, add 1% C2Cl6 Refining for 20 minutes, add Al-10Sr master alloy to modify, cool to 600 ℃, add preheated pre-oxidized SiC preformed block and stir for 30 minutes, rotate at 300 r/min, then keep for 30 minutes and pour into 200 ℃ A semi-solid billet is obtained from the preheated mold. It was re-heated and extruded on a 450T hydraulic press. The heating temperature was 600 ℃, the heat preservation was 45 min, the extrusion force was 2000 kN, the extrusion speed was 1 mm/s, and the pressure was kept for 10 s. Take out and obtain SiCp/ZL101 aluminum composite material, its composition is shown in Table 1.

Figure 1 is the SEM and energy spectrum of the SiCp/ZL101 aluminum composite material. It can be seen that there are mainly Al, Si and Mg elements at the interface of the composite material. Al is mainly distributed inside the crystal grains, and the SiC particles distributed in the matrix are surrounded by oxygen (O). From Fig. 1c, Fig. 1e and Fig. 1f, it can be seen that Si, O and C gather at the same position, which indicates that the pre-oxidized SiC The SiO2 on the surface prevents the formation of the harmful Al4C3 phase. Comparing the distribution of Si and Mg (see Fig. 1c and Fig. 1d), it is found that the content of Mg and Si at the grain boundary is quite different, and it is speculated that it may be present at the grain boundary in the form of Mg2Si phase. 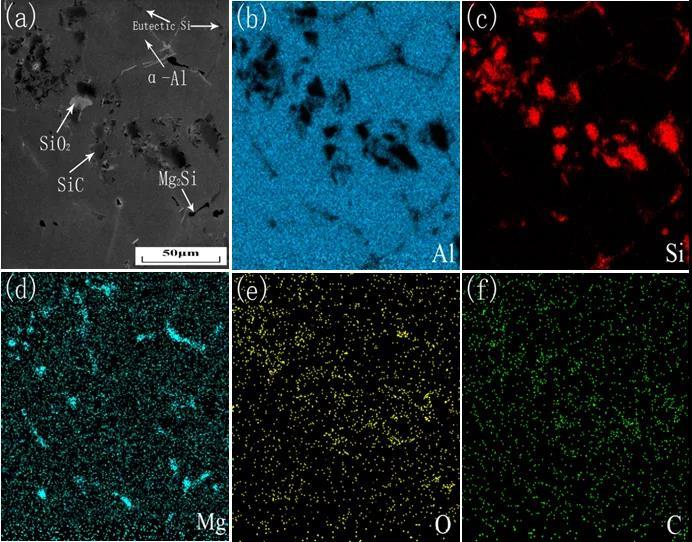 Figure 2 shows the microstructure of the SiCp/ZL101 aluminum composite, and Figure 3 shows the SEM structure of the corresponding composite at high magnification. It can be seen from Figure 2a and Figure 3a that the microstructure of the composite material is α-Al+eutectic Si+SiC particles, α-Al is nearly spherical, and SiCp is evenly distributed at the grain boundary. Shaped or striped, partly attached to the SiCp surface to form nuclei, which indicates that the SiCp is well bonded to the matrix. Comparing Figure 2a and Figure 2b, it can be found that the extrusion process deforms the nearly spherical α-Al, and the eutectic Si phase does not change significantly. However, after solution treatment (see Fig. 2c), the deformed crystal grains all showed different degrees of spheroidization, and individual crystal grains grew up; the corresponding analysis in Fig. 3c shows that the eutectic Si at the grain boundary The change from long strips and needles to short rods and spheres has occurred. This is because during the solution treatment, the eutectic Si is partially dissolved and the spheroidization process is completed through diffusion behavior. Comparing the solid solution + aging treatment (see Figure 2d and Figure 3d), it is found that the number of precipitates at the grain boundary and the SiC surface has increased. This is because a large number of vacancies are generated in the alloy during the solution quenching process, and Si and Mg atoms are both Through the rapid diffusion of vacancies, Si atoms and Mg atoms are easy to form clusters. In the subsequent aging state, with the extension of time, the secondary precipitated fine Si phases gradually nucleate and grow on the surface of SiCp. 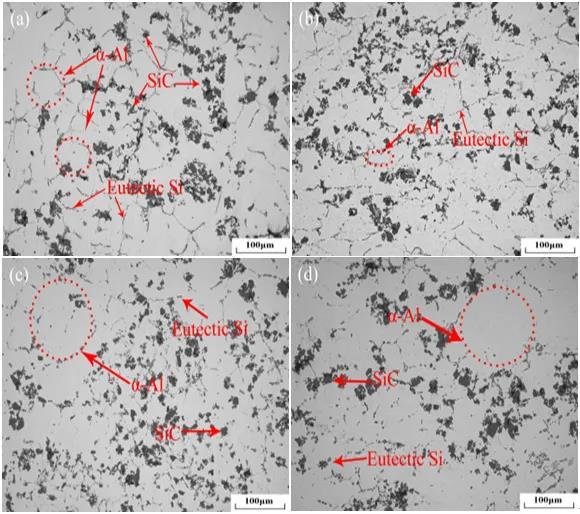 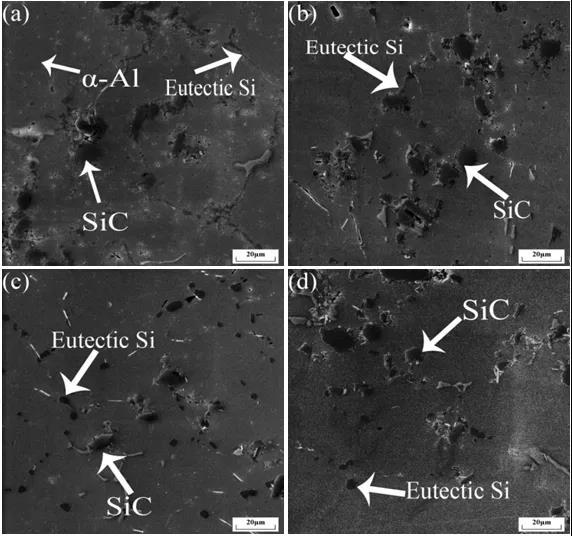 
Comparing the properties of the composite material in the solid solution state and the solid solution + aging state, it is found that the yield strength has a large increase of 51.55%, and the tensile strength has a small increase of 13.48%. This is because although the microscopic morphology of the eutectic structure (α-Al+Si) after the two heat treatments has not changed significantly, the aging process promotes the precipitation of solute atoms Mg and Si in the solid solution, and the size of the aggregated solute atom clusters is very large. Small, semi-coherent relationship with the matrix, so that the covalent bond binding ability is stronger, and the resistance to dislocation movement is correspondingly increased. Therefore, the resistance of the composite material to plastic deformation is greatly improved, which is manifested as an increase in the yield strength. ; The Mg and Si atom clusters and the fine Si phases that are generated during the aging process are dispersed and have a certain effect on the tensile strength of the alloy. 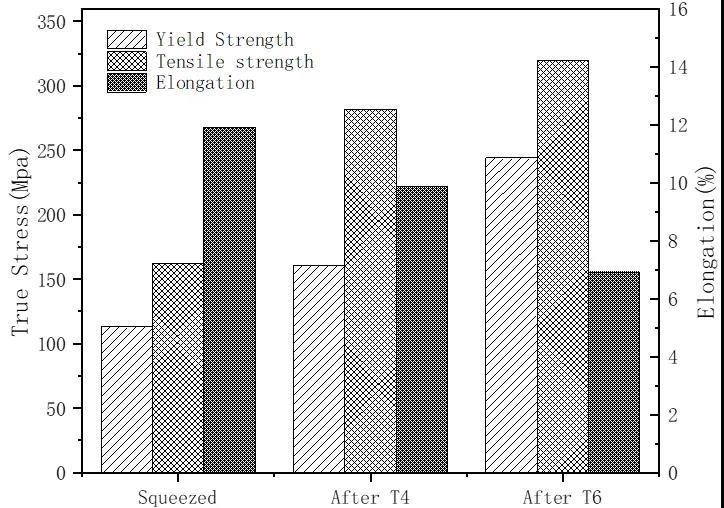 Figure 5 shows the tensile fracture morphology of SiCp/ZL101 aluminum composite under different heat treatment conditions. It can be seen from Figure 5a that the fracture characteristics of the composite material after squeeze casting are typical plastic fractures. There are a large number of dimples of different sizes distributed on the interface. The dimples are large in size and relatively deep, and the tearing edge is very Obviously, there is a flat eutectic Si phase interface inside the dimples. This is because during the tensile test, there are more defects at the grain boundaries, and the mechanical properties of the eutectic Si phase are worse than that of the matrix. The inside of the eutectic Si phase and the formation of dimples through the second phase during the expansion process, the composite material has low strength. After solution treatment (see Figure 5b), the fracture morphology is still dominated by dimples, the dimples become uniform, and the size is significantly smaller, and the number of tearing edges is reduced. Therefore, the strength of the composite material is significantly improved while the plastic change is not large. . 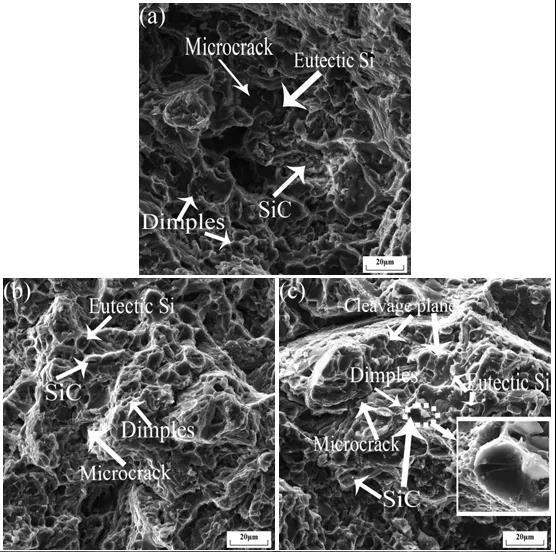 Figure 6 shows the hardness of SiCp/ZL101 aluminum composite material under different heat treatment conditions. The results showed that the hardness (HV) of the extruded composite material was 61.7, the hardness increased to 106.1 after solution treatment, and reached 114 after solution + aging treatment. The reason is that the quenching process produces a supersaturated solid solution and a large number of vacancies, and subsequent natural aging occurs, and the supersaturated solid solution transforms to an equilibrium state. The existence of vacancies promotes the segregation of solute atoms to form a hardened zone, and precipitation hardening significantly increases the hardness of the composite material. Because of the artificial aging in the solid solution + aging process, the higher aging temperature promotes the diffusion and segregation of solute atoms and the subsequent precipitation of the secondary Si phase, which further enhances the hardness of the material. 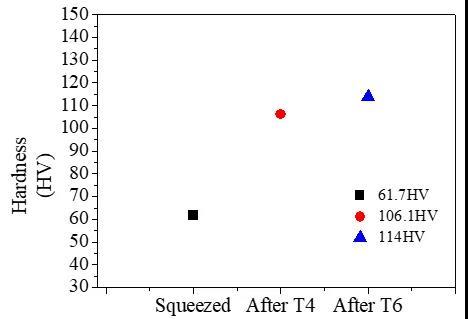 (1) The SiCp/ZL101 aluminum composite material successfully prepared using semi-solid mechanical stirring and near liquidus technology has a nearly spherical α-Al and eutectic Si structure, and SiC can be more uniformly dispersed in the matrix; After the second heating, the SiCp/ZL101 composite material was obtained by extrusion.

(2) The morphology of the eutectic Si in the microstructure of the SiCp/ZL101 composite after the solution treatment has undergone a significant change, from a long strip to a spherical shape. After aging treatment, the number of precipitated phases at the interface between the matrix and the reinforced phase increases .

(3) The tensile strength, yield strength and elongation of the SiCp/ZL101 composite after solid solution + aging treatment reached 320MPa, 244MPa and 6.91%, and the hardness (HV) reached 114; the reason for the fracture machine is that the microporous aggregation fracture is transformed into The quasi-cleavage fracture, the second phase precipitated during the aging process and the atomic aggregation zone produced may be the cause of the substantial decrease in the plasticity of the material.