At present, in the mold manufacturing, EDM, forming grinding, wire cutting and other new processes have been applied, which have solved the problems of complex mold processing and heat treatment defor

At present, in the mold manufacturing, EDM, forming grinding, wire cutting and other new processes have been applied, which have solved the problems of complex mold processing and heat treatment deformation. However, these new processes have not been universally applicable due to various conditions. Therefore, how to reduce the deformation of the heat treatment of the die is still a very important issue.
The general mold requires high precision. After heat treatment, it is inconvenient or even impossible to carry out processing and calibration. Therefore, even after the heat treatment, even if the properties of the structure have reached the requirements, if the deformation is poor, it will still be scrapped due to irremediability. Not only affects the production, but also causes economic losses.
The general law of heat treatment deformation is not discussed here. The following is a brief analysis of some factors that affect the deformation of the mold.
Effect of Mold Materials on Heat Treatment Deformation
The effect of the material on heat treatment deformation includes both the chemical composition of the steel and the original structure.
From the perspective of the material itself, the heat treatment distortion is mainly influenced by the influence of the composition on the hardenability, the Ms point, and the like.
When the carbon tool steel is quenched with water and oil at normal quenching temperatures, it generates large thermal stress above the Ms point; when it cools down to below the Ms point, austenite transforms to martensite, causing tissue stress, but Due to poor hardenability of carbon tool steel, the value of the tissue stress is not large. In addition to the low Ms point, the plasticity of the steel is already very poor and the plastic deformation is not easy to occur during the transformation of martensite. Therefore, the deformation characteristics caused by the thermal stress are retained, and the mold cavity tends to shrink. However, if the quenching temperature is increased (>850°C), it may also be dominated by the stress of the tissue and the cavity tends to swell.
When using 9Mn2V, 9SiCr, CrWMn, GCr15 steels and other low-alloy tool steels to make molds, the quenching deformation law is similar to that of carbon tool steels, but the deformation amount is smaller than that of carbon tool steels.
For some high-alloy steels, such as Cr12MoV steel, because of its high content of carbon and alloy elements, Ms point is lower, so there are more residual austenite after quenching, which has volume expansion due to martensite Counteracting effect, therefore, the deformation after quenching is quite small, generally with air cooling, air cooling, salt bath quenching, the mold cavity tends to micro expansion; if the quenching temperature is too high, the amount of retained austenite increases, type The cavity may also shrink.
If the mold is made of carbon structural steel (such as 45 steel) or some alloy structural steel (such as 40Cr), because of its higher Ms point, when the surface starts martensite transformation, the core temperature is still higher, and the yield strength is higher. Lower, with a certain plasticity, the surface of the heart of the instantaneous tensile tissue stress, easy to exceed the yield strength of the heart and the cavity tends to swell.
The original structure of the steel also has a certain influence on the quenching deformation. The "raw original structure of steel" referred to here includes the grade of inclusions in steel, the level of banded structure, the degree of segregation of components, the directionality of distribution of free carbides, etc., and the different structures obtained by different pre-heat treatment ( Such as pearlite, tempered sorbite, tempered troostite, etc.). For mold steels, the main considerations are carbide segregation, carbide shape and distribution morphology. 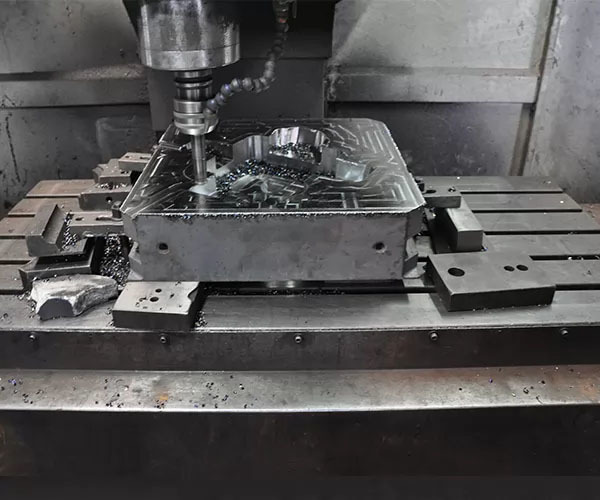 How To Improve The Production Quality Of Aluminum Alloy Die Castings