The EU formulated its environmental protection plan in 2007 and is expected to achieve this goal by 2020. The target is to reduce energy consumption and greenhouse gas emissions in Europe by about 20%

The EU formulated its environmental protection plan in 2007 and is expected to achieve this goal by 2020. The target is to reduce energy consumption and greenhouse gas emissions in Europe by about 20% compared with 1990, while increasing the share of new energy in the EU to 20%.
As the largest economy in Europe, Germany accounts for about 20% of the total CO2 emissions in Europe, and is a major emitter of greenhouse gases. Although Germany has achieved some results in reducing emissions, it still has a great responsibility to further reduce emissions.
In order to achieve the goal of energy saving, Germany must produce more effectively and continue to reduce car CO2 emissions. In order to promote the reduction of harmful emissions, the European Parliament has set a limit of 95 g/km of CO2 emissions for all automotive enterprises by 2020. The limit is about 4 litres of gasoline or 3.5 litres of diesel fuel consumed per 100 kilometers. If the maximum limit is exceeded, the manufacturer will be fined heavily. 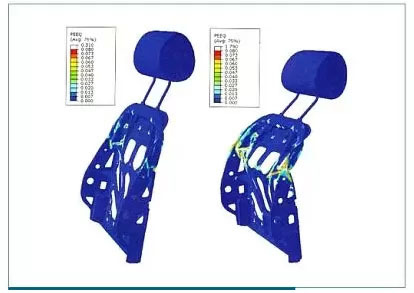 Cost saving:
The design of lightweight structure in car is very helpful to achieve the purpose of EU climate protection. The basis for achieving this goal is not only the use of lightweight materials, but also the continuous use of lightweight structures. By this way, not only the weight of the body can be greatly reduced, but also the load of the components can be maximized, and the technological links can be greatly shortened. At present, a high strength and light weight integrated die-casting magnesium alloy backrest structure can be used to replace the steel seat backrest composed of multiple components, thus realizing the possibility of weight reduction.
In the framework of this paper, an optimization scheme is provided, which can replace the original steel back-to-back structure and further achieve the goal of weight reduction and strength enhancement through a variety of design schemes. Using individualized casting system to analyze the casting process can find the weaknesses in the casting process and optimize the weaknesses. This method has pointed out the direction for the design concept to realize the overall development of castable parts, and has become the dominant idea for the sustainable development of lightweight parts in the automotive industry.
Car suppliers also need to meet environmental protection requirements, with CO2 emissions of 0 g per kilometer for electric vehicles. Although reducing emissions in the overall automotive industry, according to the current situation, electric vehicles and hybrid vehicles can only increase to 3 million by 2020, while the traditional fuel vehicles will increase by 30 million, or even more than 100 million. (Fig. 1). 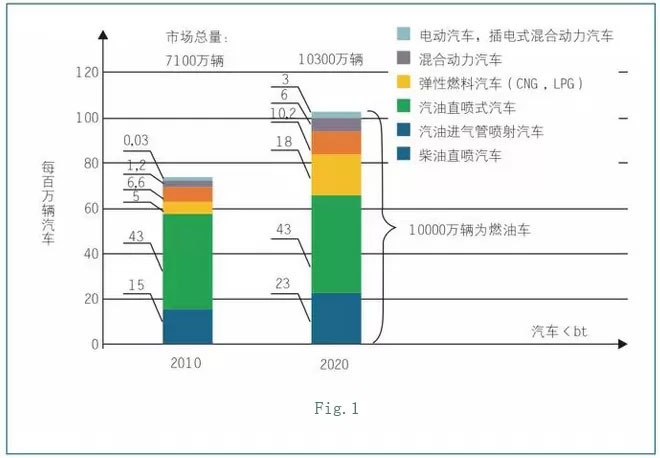 In order to achieve the goal of the European Union, the adoption of lightweight structure in cars is the key to ensure that the preconditions are met. According to McKinsy's research, although the increase in body weight can be offset by energy-saving engine technology or electric drive devices, the proportion of lightweight components in automobiles must also be increased from 30% in 2013 to 70% in 2030. Battery-driven cars will increase by about 250 kilograms due to the heavy weight of batteries. Vehicle chassis and brakes will bear greater loads, so components must be more robust and able to withstand heavier loads.
The lightweight structural potential of car seats is a very interesting topic. Although magnesium seat structures, such as Mercedes SLK, have been used in some automobiles, steel plate structures still account for a large proportion. Therefore, in this study, we need to strengthen the development of lightweight structural potential. The purpose is to replace the steel seat backrest made of multi-components by a high strength and lightweight integrated die-casting magnesium backrest structure. Finally, a lightweight magnesium alloy component with strength comparable to the original component is manufactured.
Concept and Design of Magnesium Alloy Die Casting
The key points of development are introduced in the design of the back-to-back (Fig. 2) below. This is a seat structure used in mass-produced high-end cars. This kind of seat has been used as the standard configuration of V8 motorized leather material package, and also has the function of electric adjustment of headrest. 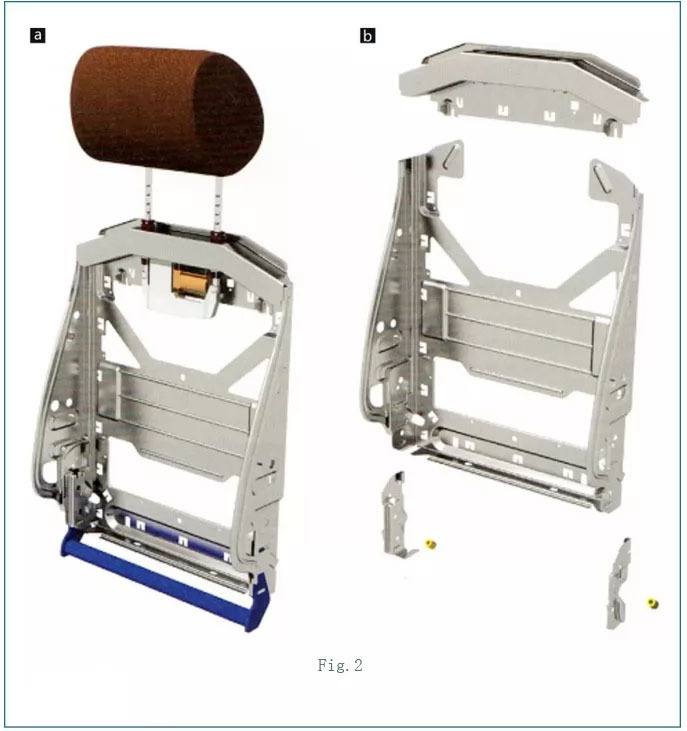 Firstly, the real structure of the backrest is imported into the CAD module. The connection mode of the connector with the pillow bracket and the rear structure of the seat is exactly the same as the prototype, so that it can be simulated as real as possible.
The original steel plate structure consists of six parts, four of which are stamped and pressed. A total of sixteen welds are required for all components to be assembled and finally sprayed with anti-rust paint (Fig. 2). The total weight is 3.24 kg.
The first objective is to redesign and reconstruct the seat backrest consisting of six components, including magnesium alloy die casting process. This part is made of alloy AM60 (EN-MC MgAl6Mn), which can meet the comprehensive requirements of castability, elongation and tensile strength. The manufactured parts can at least meet the strength requirements specified in the standard inspection. Magnesium parts can not only absorb the energy of damage deformation, but also realize the original plate structure. Finally, the casting simulation of the geometric structure is carried out by using the simulation analysis soft year, and the operability is evaluated. At the beginning of this paper, the original slab structure is evaluated by FEM analysis (FEM-FEM modeling), and the reference value is obtained. The reference value is used as the load parameter of the analysis. 890N force is applied to the headrest in the direction opposite to the driving direction. The force value is the minimum force that components can bear under EU/ECE audits. If the backrest can bear the load, then gradually increase the force value until cracks or instability occur in the parts.
Similarly, FEM simulation is also needed for magnesium alloy die castings. The first design (Figure 3) is a geometric structure with drawing angle suitable for die casting process. The connecting position of the seat structure and the headrest, and the hooks of the leather and other important hollow structures are arranged on the original position of the plate structure. The component weighs 1.45 kg, which is lighter than half the weight of the steel back. Insufficient rigid edges are set in the transition section from transverse support to side wall, which can only withstand 325N force, so the structure has not passed the inspection. 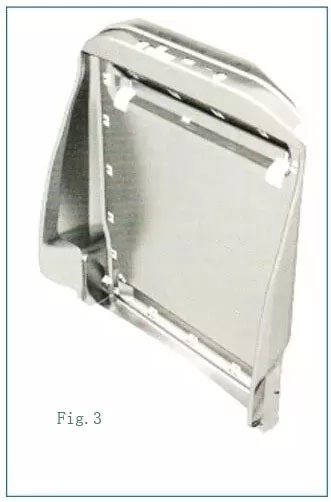 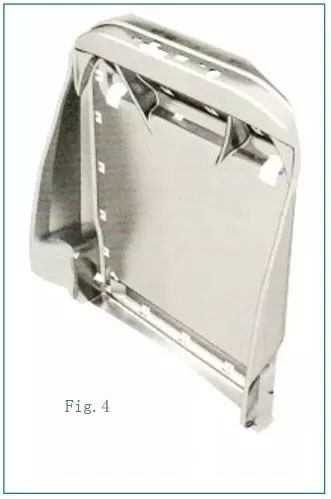 Firstly, the second generation backrest structure is optimized, and the stiffness of the structure is optimized. That is to say, flanging is added to the upper cross brace of the whole rear wall, which strengthens the edge between the side wall and the cross brace, and ribs are set on the back of the cross brace (fig. 4). This relatively simple but very effective measure greatly increases the load-bearing capacity to 1406N. With this change, the weight of the components increased to only 1.52 kg compared with the first generation. Comparing the FEM simulation of the plate backrest with the second generation magnesium casting backrest, it can be found that the mass-produced backrest can withstand higher load than 890N, and only need to be modified appropriately (Fig. 5).

The third generation optimization design is developed on the basis of the previous FEM simulation and the effective stiffness-increasing edge-rolling design. The crimping design cuts across the whole part, further improving the height. In addition, for the purpose of weight reduction, the hollow area is further increased. This version (Fig. 6) completely adopts a new design structure. A new structure is adopted in the transition section of the cross brace, which eliminates the sharp edge which is prone to stress concentration before. The results of FEM analysis show that the component can withstand 1691N (+81%) load and its stiffness is greatly increased compared with the original one. Nevertheless, the weakness of the new edge was found in the load analysis. Damage occurs at this vulnerable point because different curling edges form a curved edge (Fig. 7). 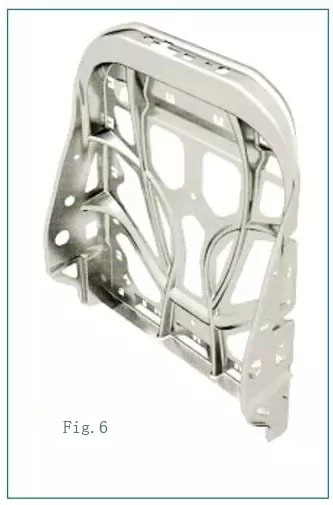 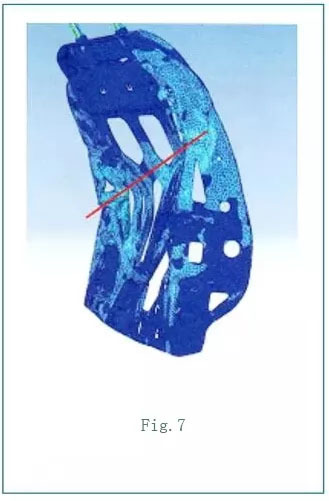 In the development stage of the 4th generation magnesium backrest structure, the stiffness was optimized by special rib design. The basic structure of the component adopts the same side wall and cross brace as the third generation. The wall thickness of the side wall and the upper edge of the brace increased from 2 mm to 3 mm. Another major change is the addition of rib structures to the front and rear sides of the entire component (Fig. 8). Compared with the original steel plate structure, the stiffness is increased by 270% and the bearing load is increased to 3462N. The structure has the maximum stiffness at present, and its weight has increased to 2.23 kg. Although the weight has increased, it is still much lower than the production backrest of steel plate structure. Based on the previous generation of die castings, the 5th generation magnesium backrest structure was developed for the purpose of lightening. The rib structure, which is not important for compromise stiffness and weight optimization, is eliminated in this structure (Fig. 9). Despite the technical difficulties of casting, the wall thickness is further reduced to 1 mm and the hollow area is further increased. Through the above modification, the weight was reduced by 70% and the weight was reduced to 0.96 kg. The load is still much higher than the limit value of 1299N. 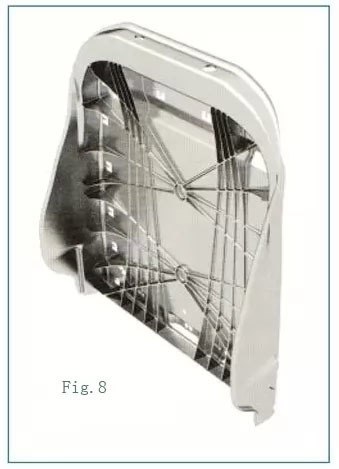 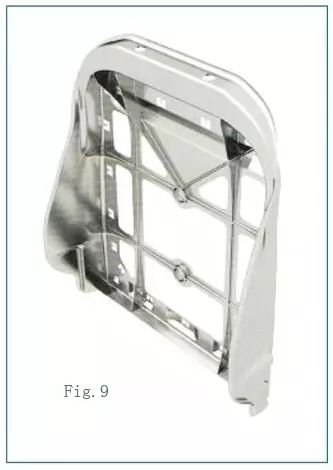 Casting simulation analysis by software
In order to verify that the 5th generation magnesium backrest structure can be manufactured by casting technology after weight optimization, the casting simulation analysis was carried out by analysis software. Firstly, the casting process system suitable for this structure should be developed. Special attention should be paid to avoiding molten eddy current caused by unsuitable fracture geometry. Figure 10 shows a sealed filling process. The exhaust is carried out through a specially designed overflow outlet to reduce the air holes (Fig. 10). 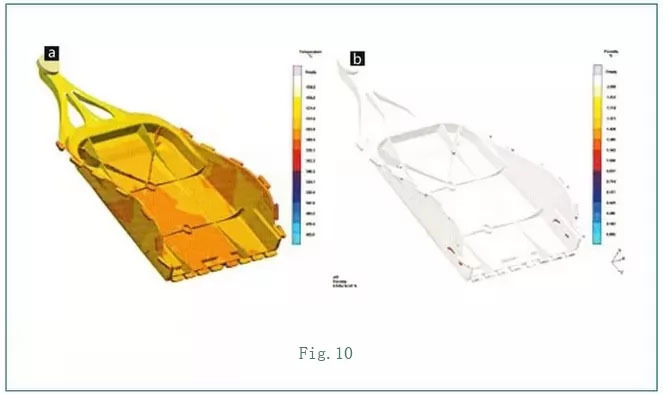 Summary and discussion
According to the research on the back-to-back of magnesium castings developed, it is found that light castings have great application potential in the automotive industry. In addition to the use of lightweight materials to form a lightweight structure, but also has great application value. The aim is to replace the backrest of steel plate structure composed of six parts by high stiffness and lightweight integrated magnesium alloy die castings. The feasibility of the backrest is proved by simulation analysis in various aspects. At the same time, it is shown that the stiffness of the components can be greatly enhanced by the rib structure under the original conditions. The different stages of back-to-back assessment can be checked and evaluated by the finite element analysis method which conforms to the EU/ECE rules (UN/ECE-United Nations Economic Commission for Europe).
Magnesium die castings developed meet the standard requirements, even in some ways far exceed the standard requirements, as shown in Figure 11. Other advantages of integrated castings include reduced process steps (pressing, stamping, welding, cleaning and spraying), thus shortening the process. Consequently, energy consumption is greatly reduced, recovery potential is increased and resource utilization is improved. 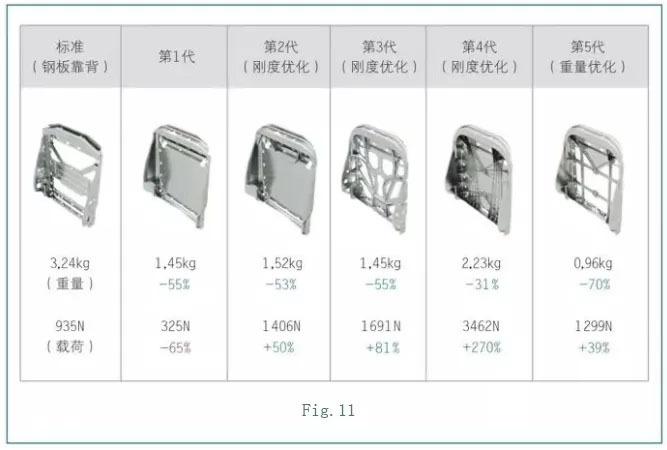 It can be confirmed that the lightweight backrest structure developed through this research work can not only meet the purpose and requirements put forward at the beginning of this paper, but also has great application feasibility in the automotive industry. It not only greatly reduces the vehicle weight, but also continuously reduces CO2 emissions. The economic aspect of this study has not yet been carried out, and other energy-saving casting processes and processes will be carefully observed in the next step.