Cast aluminum alloys have the advantages of light weight, good castability, and mechanical properties that can be improved through heat treatment and mechanical treatment. They are increasingly used in industries such as automobiles, aviation, shipbuilding, and military engineering. In particular, cast aluminum-silicon alloys are widely used in automotive engine parts, such as pistons, cylinder heads, and engine blocks, due to their excellent wear resistance. However, in the T6 heat treatment process, too high temperature in the solid solution stage will lead to the coarsening of unmelted intermetallic compounds on the grain boundaries, which will significantly reduce the hardness and tensile strength of the alloy. To ensure the superior thermal stability of cast Al-Si alloys, copper is added to conventional Al-Si-Mg alloys. The presence of copper and magnesium in the Al-Si-Cu-Mg alloy can precipitate more stable Cu-based intermetallic compounds, making the aluminum alloy after T6 heat treatment have higher thermal stability. In this paper, by optimizing the T6 heat treatment process of cast aluminum-silicon alloy containing Cu and Mg, the evolution of microstructure and the change of alloy hardness properties during solution treatment and aging are studied.

Aluminum alloy smelting raw materials include 99.9% aluminum ingots, 99.7% Al-50%Cu ingots, 99.7% Al-20%Cu ingots, and 99.9% Al-60%Mg ingots. After proportioning and weighing according to the predetermined alloy composition in the test, melting is carried out in a well-type resistance furnace and melted in a boron nitride-coated graphite crucible at a melting temperature of 750 °C. For grain refinement with Al-5Ti-1B modifier, the molten metal was stirred and allowed to stand for 30 min to ensure complete dissolution. The alloy was degassed with argon for 5 min, and then poured into steel molds for casting. The steel molds were used at different temperatures: 25 °C and 200 °C. The alloy after smelting is measured by spectrometer

A small piece of 10 mm×10 mm×6 mm was cut from the ingot to optimize the T6 heat treatment process. The steps are as follows.

(1) Optimization of the first stage of solid solution treatment. Using STA499C comprehensive thermal analyzer, under the protection of argon, the dynamic temperature rise test was carried out on the cast aluminum-silicon alloy from room temperature to 700 °C, and the heating rate was 10 °C/min. The phase transition temperature of the alloy was determined from the differential heat curve.

According to differential thermal analysis, the solution treatment temperature of the first stage is 495°C, and the solution time is 0.5h, 4h, 5h, and 6h respectively. The solution-treated samples were then subjected to differential thermal analysis to determine the minimum time required for homogenization and dissolution of the eutectic phase. Next, part of the solution-treated sample was quenched in water at 60°C, and then subjected to aging treatment at 200°C for 2 hours.

The mechanical properties are characterized by Brinell hardness (Beijing Jinyang DHB-3000A electronic Brinell hardness tester), which is implemented in accordance with the GB/T 231.1 standard. The metallographic test was carried out using a 9XF metallographic microscope and a field emission scanning electron microscope (field emission GeminiSEM 500 scanning electron microscope from Germany) produced by Shanghai Optical Instruments. The ground and polished samples were chemically etched with 0.5% HF solution. 02 Test results and discussion

Figure 1a shows the as-cast aluminum alloy structure. It can be seen from the figure that the as-cast aluminum-silicon alloy structure is composed of eutectic silicon particles and α-Al dendrites. Some irregular particles are also observed in the α-Al matrix structure, as shown by the black arrows in Fig. 1b, which may be the result of backdiffusion from dendrites to pre-existing Si particles during cooling. The white arrows in Figure 1b show some intermetallic compounds between the dendrites, which were analyzed by scanning electron microscope

The most common intermetallic compound phase found in the as-cast Al-Si alloy structure is the θ-Al2Cu phase, which exists in two different forms, including bulk (denoted as θb, Fig. 2a) and eutectic (denoted as θe, Figure 2b). According to the existing research, the β phase is Al5FeSi phase, the π phase is Al8Mg3FeSi6 phase, and the Q particles appear as regular blocks with smooth boundaries (Fig. 2a). When Q particles are combined with θ-Al2Cu, the chemical composition is consistent with Al5Cu2Mg8Si6 (Fig. 2c). This is attributed to the fact that these phases are formed in the final eutectic reaction during solidification. Differential thermal analysis of the as-cast alloy identified a low-melting compound characterized by an onset of reaction at 507°C and a peak at 509°C 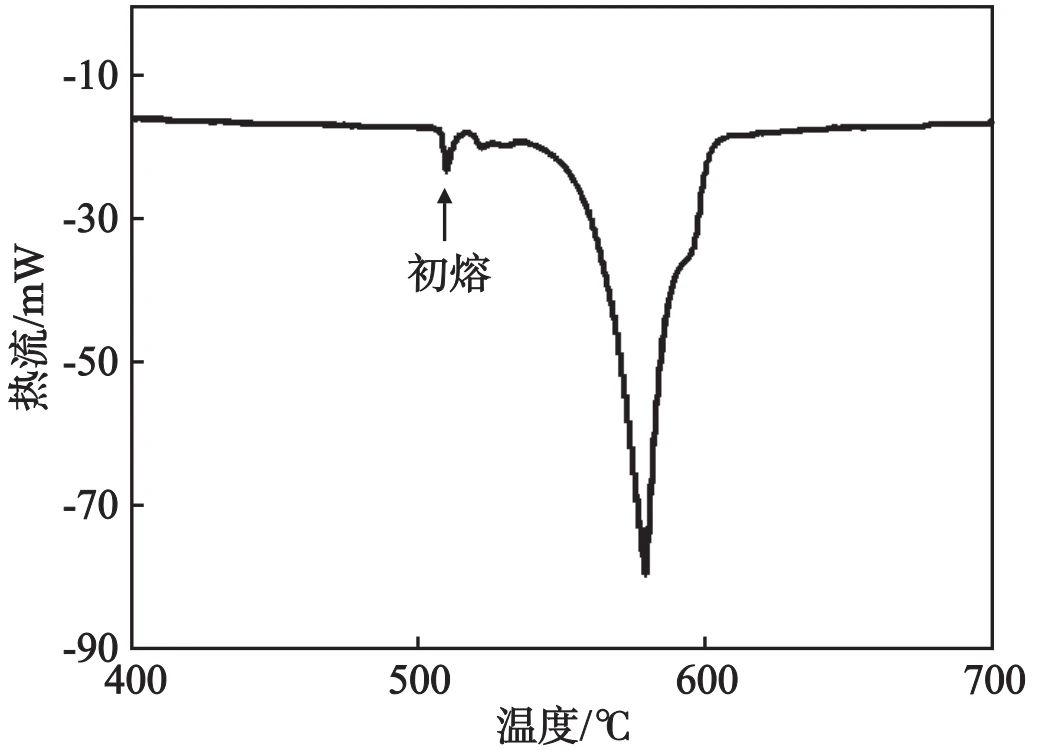 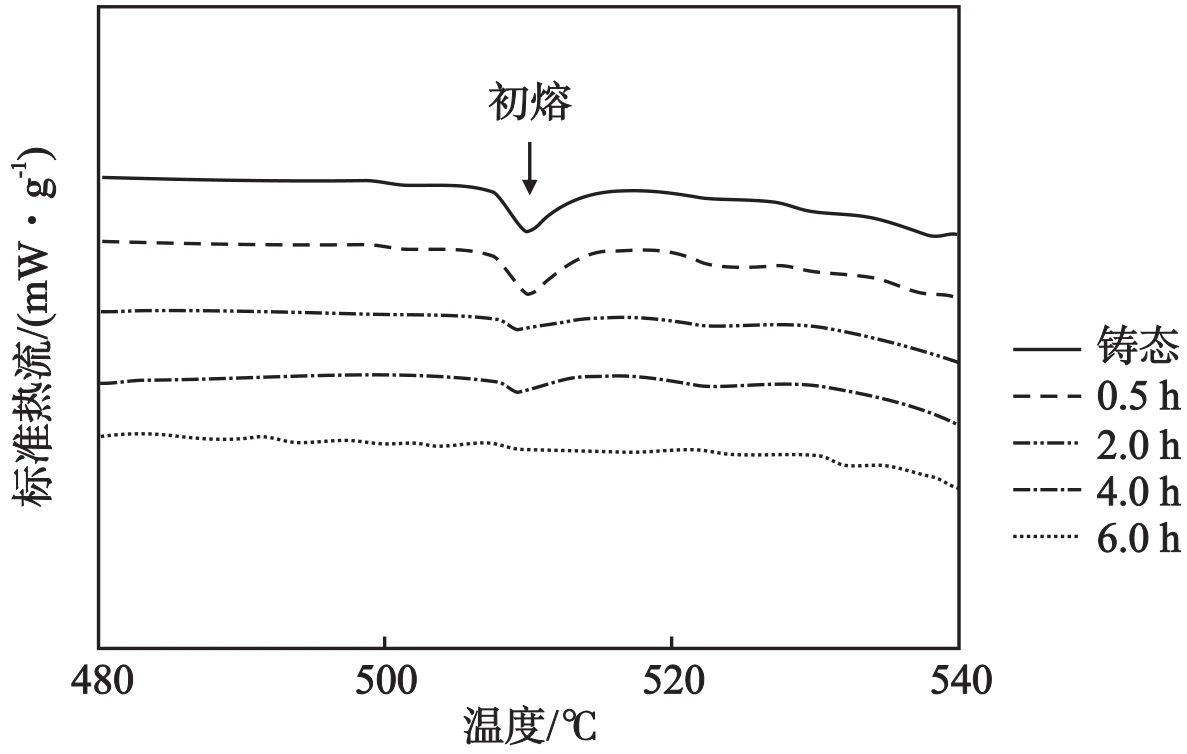 After solid solution at 95℃ for 2 hours, the intermetallic compound phase θ-Al2Cu in the alloy structure did not change significantly, but after solution treatment for 6 hours, the θ-Al2Cu phase was broken and almost completely dissolved, and only a small amount of The massive θ-Al2Cu phase, which is caused by the different dissolution behavior between the massive and eutectic particles, the eutectic phase will be continuously broken into small fragments during the dissolution process, while the massive phase is the whole particle gradually The process of dissolution. 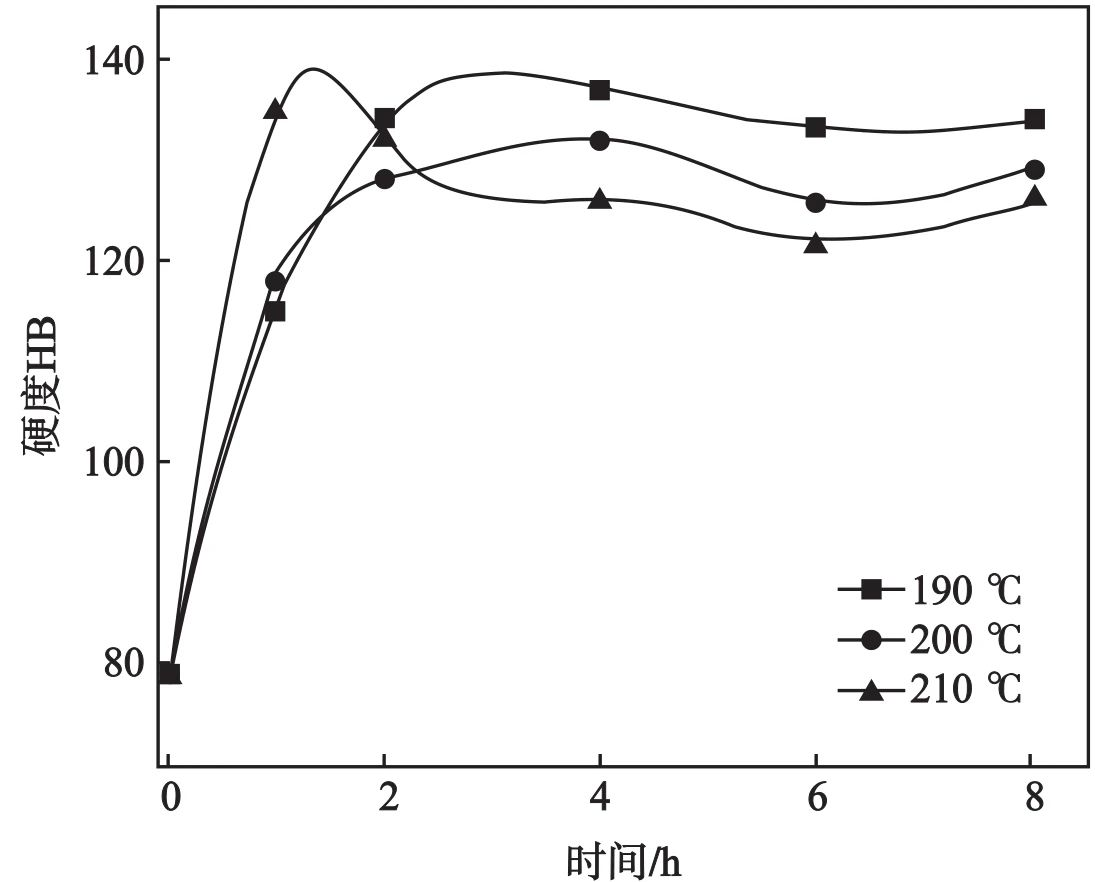 (1) According to the metallographic structure and differential thermal analysis, it can be concluded that after the cast aluminum-silicon alloy in this test was solid solution treated at 495°C for 6 hours, the endothermic peak of initial melting almost disappeared, and the θ-Al2Cu phase in the microstructure was broken , almost completely dissolved, thus determining the first stage solid solution treatment time is 6h.